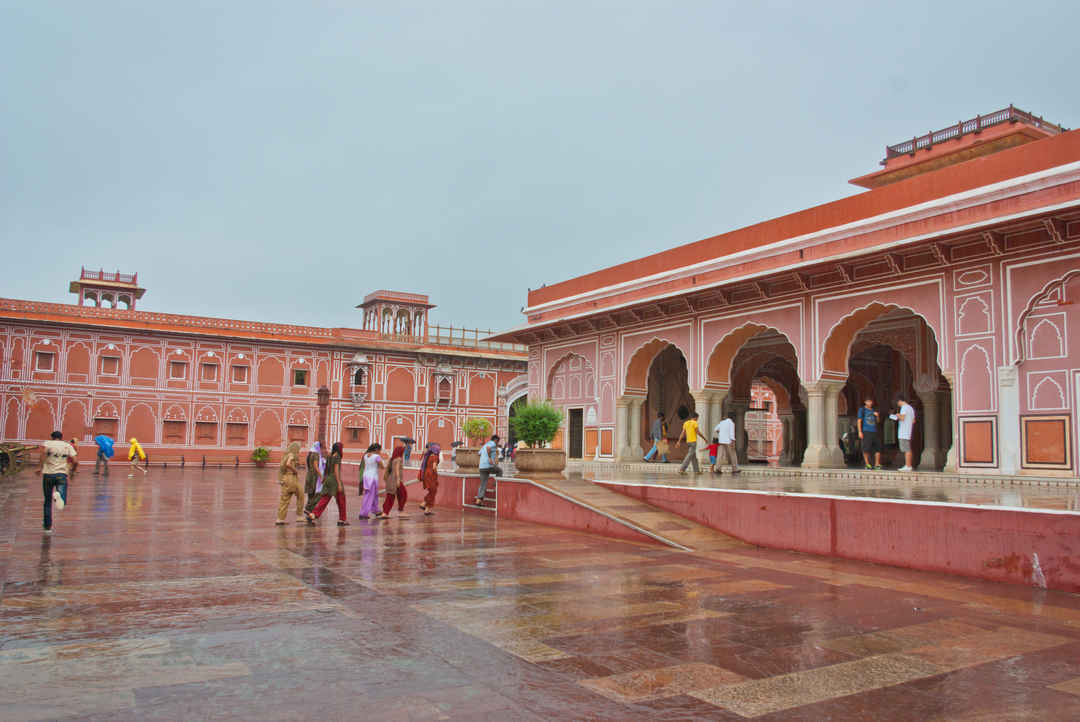 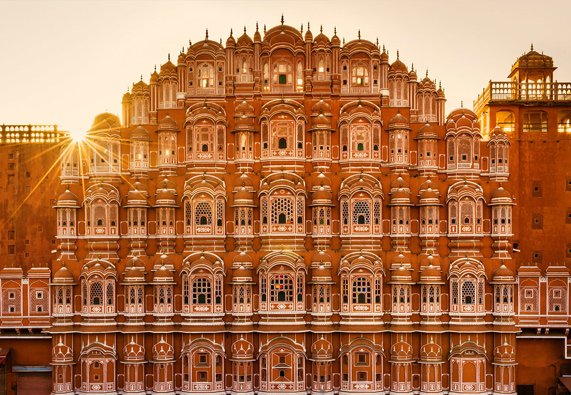 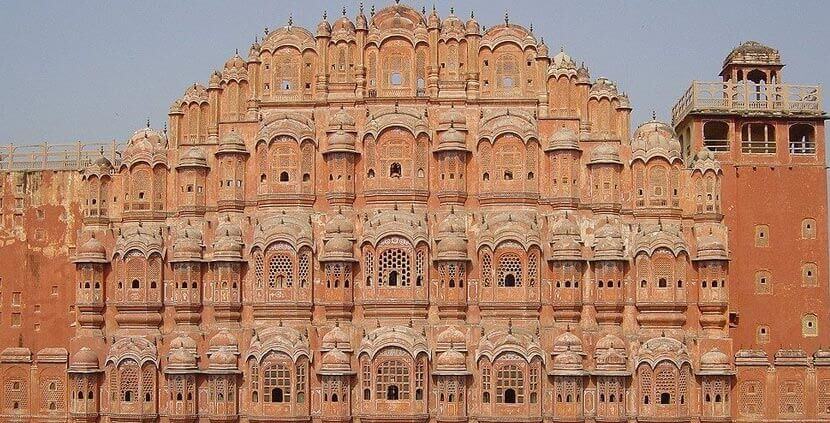 The pink city Jaipur is one of the most famous & charismatic historical city for tourist destinations in India and we talk about Jaipur sightseeing tour or many Tour Package related Jaipur tour. Jaipur is a magnetic, ancient, and historical city that provides a range of outstanding and fascination activities and magnetism. Jaipur typically requires two days to fully explore but unfortunately time boundation or other external Regain may only allow for a One day to explore the city.
Rajasthan Holiday Team provide a suggested itinerary for a 1 day visit to Jaipur, which will include only the most popular and best sections of the city.

This magnificent fort comprises an extensive palace complex, built from pale yellow and pink sandstone, and white marble, and is divided into four main sections, each with its own courtyard. It is possible to visit the fortress on elephant-back, you will enter Amber Fort through the Suraj Pole (Sun Gate) , which leads to the Jaleb Chowk (Main Courtyard), where returning armies would display their war booty to the populace – women could view this area from the veiled windows of the palace. The ticket office is directly across the courtyard from the Suraj Pol. If you arrive by car you will enter through the Chand Pol (Moon Gate) on the opposite side of Jaleb Chowk. Hiring a guide or grabbing an audio guide is highly recommended, as there are very few signs and many blind alleys. Other Attraction of Amber fort is Diwan-i-Am, Ganesh Pol, Jai Mandir,SukhNiwas, Maota Lake &The Amber Sound & Light Show takes place below the fort in the complex near Maota Lake.

The Jal Mahal is an exquisite palace built at the middle of the Man Sagar Lake. The palace stands bright with five floors, four of which remain under water. Jal Mahal was built by Maharaja Madho Singh I to serve as a lodge for his duck hunting parties. The Mahal is a testament to the bond that was formed between the Rajput’s and Mughal Empire. The architecture of the palace has resemblance of both types of construction.

It is built in a valley surrounded by Aravali hills and is located on the way to the Amer Fort at the bottom of the Nahargarh hill. The place is approx 8 km north of the Jaipur city. he garden complex is having many nearby tourist attractions as the Amer fort Palace, The garden adds more beauty to the region. This is the best place for sightseeing, strolling, relaxing and photography. Apart from the nature, you can find temples and other structures here. Apart from flora-based attractions, this garden is also a treat for bird watchers you can spot a few migration birds like Neel Kanth, Kingfisher, spotted dove and others.

The Royal Gaitor Tumbas was a tomb for the kings of that reign namely Madho Singh II, Jai Singh II, and Pratap Singh. This place offers restfulness to someone who seeks solitude after strolling around the chaos of the city. The royal cenotaphs of the Rajas are built here in their honor. The cenotaph of Maharaja Jai Singh II is personage made of white marble with intricate carvings on it.

City Palace of Jaipur is one such splendid historical architecture which you can’t afford to miss if you are in Jaipur. This palace complex has a massive array of buildings, gardens, temples, museum and courtyard presenting the hues of Rajputana Architecture of ancient times. The city palace was a home to the Maharaja of Jaipur. Created by Sawai Jai Singh II, this palace is a huge attraction to tourists who are huge fans of ancient history and art. The city palace if Jaipur is a paragon of the royal grace and historic importance of Rajasthan’s culture.

Hawa Mahal, also known as “Palace of Wind”, was built in 1799 as an extension to the Royal City Palace of Jaipur. Hawa Mahal is a five story building that is situated in the heart of the city of Jaipur. It has a beehive like structure and is made of red and pink sand stone lined with white color to make it vibrant. It is pink like the rest of the pink city of Jaipur. for the woman of the royal palace. In medieval India a ‘pardah’ system was followed where the royal woman followed seclusion. In order for royal woman to be connected to the outside would the Hawa Mahal was built. The queens and princesses could look at the various processions and events through the many windows of the Hawa Mahal.

Jantar Mantar is a chain of observatories constructed by Maharaja Sawai Jai Singh II in five cities of India with Jantar Mantar-Jaipur being the largest and well-maintained of them all. The astronomical observatory of Jantar Mantar is used to measure the astronomical activities of the position of stars and exact movements of the earth around the Sun. It has a total of nineteen astronomical instruments and an equinoctial sundial. Jantar Mantar of Jaipur is a UNESCO world heritage site because of its architectural grandeur.

Being one of the most visited tourist attraction of India, Albert Hall Museum was earlier a concert hall which was constructed in 1876. This museum is a remark of the colonial legacy of ancient India. It now serves as a state museum of Rajasthan. The museum is curated with a rich collection of artworks like paintings, semi-precious stones, jewelry, and crystal works. The museum now is famous for photography and its artifacts. The museum is not only known for its elegant art gallery collection but for its architectural designs

Jaipur is also known as the Pink City, due to the dominant color scheme of its buildings and “Paris of India” is better known for its royalty and the wonderful monuments. But, very few people are aware of the list of endless things that make it a must visit shopping destination. There are undoubtedly some remarkable shopping places in Jaipur which can enrich your total shopping experience ten-fold. India’s largest and the most fabulous collection of jewelry of all types. There are many markets in Jaipur selling precious stones & gems, semi-precious stones, and jewelry with a limited warranty. This bazaar stands out for the moderate prices of items like textiles and Joothis. Here you can enjoy the novelty of street shopping in Jaipur. Plus, the bazaar lies in a pretty location and you could get to witness the ‘pink’ side of the city!

Birla Mandir is an exquisite structure of Jaipur which is also known as Laxmi Narayan Temple. This temple with religious significance is well known for its history and holy sightseeing. The temple leaves no chance to soothe your soul with the lush green garden around and the beautiful domes which signify the equality of all the religions. The temple serves as the best place for people who believe in mythology having its walls carved with the preaching of the ancestors. The tour ends with embossing a mark on your soul Tour ends with sweet memories at Jaipur

The tour ends with leaving your soul tranquilized in the glory of royal architecture and Jaipur culture. We hope to serve you with the best tourist package and introduce you to the vast culture and royal heritage of Jaipur with the pinch of taste of luxurious hotels.

Other Tourist Attraction Of Jaipur

Nahargarh is located along the Aravalli hills overlooking a beautiful lake. There is a food court and a restaurant at the top of the fort with an excellent view, The fort now also is home to the Jaipur wax museum and glass palace. The story goes that the fort was named after Nahar Singh, a dead prince whose restless spirit was disrupting construction. Whatever was built in the day crumbled in the night. The prince agreed to leave on condition that the fort was named for him. The views are glorious

The magnificent royal construction Jaigarh Fort grabs the attention of travelers with its unique approach. Particularly the carvings on the walls make it stand as an architectural wonder along with its rainwater harvesting system. This striking construction stands at the top of the Aravalli ranges with several interesting features. Mostly known as the Fort of Victory this particular fort is constructed to store the weapons and other military utilities. During the rule of Rajputs and Mughals the desert state was a major center of artillery production. Right now every traveler can see the used weapons and other war utilities that are preserved and displayed in the fort museum.